Young, fit and healthy, yet infertile male? Possible reasons why.

These days infertility can be treated just like any other disease. Now we know that the female partner is not always the sole culprit of fertility problems, and that the cause can be from either male, female, or both partners respectively. As the general statistics go, both male and female partners account for 35% cases of infertility each, 20% can be accounted for fertility problems in both partners together, and the leftover 10% of cases cannot be explained.

Common causes to male infertility are low-quality sperm and ejaculation disorders. Several reasons can be attributed to worsening quality of male sperm.Environmental pollution (toxic waste, heavy metals, etc.), poor lifestyle choices (poor nutrition, nicotine and alcohol abuse), not only inhibits sperm production, but can also affect the amount and motility. The life of a modern-day male is hectic, stressful and and overloaded with work, which can produce negative effects in sperm. Another possible cause can be attributed to prolonged sitting periods. Sitting comfortably for a long time without any movement applies pressure to the testicles, thus inhibiting their blood flow. Other possible reasons are caused by medical diseases. Mumps, sexually transmitted diseases (gonorhhea), inflamation (testicles, prostate, etc.), endocrine diseases, low testosterone levels, etc., these and similar health problems can negatively affect male fertility.

Nowadays a worrying trend can be noticed – younger and younger men produce low-quality sperm. According to rumours, tight underwear and diapers can be the key cause, but such statements have no medical proof. The most likely cause can be attributed to various reasons already mentioned in this article. This worrying trend has been confirmed by over a hundred of medical studies released over 20th Century. In 101 studies released between 1934 and 1996, the amount of sperm in one mililitre has decreased from 120 to 60 million.

Another one of potential infertility causes is the so-called “hidden hunger”. Hidden hunger is described as mineral deficiency in everyday foods and meals. Although a person can partake in a healthy and diverse diet, consume meats, fish, vegetables, fruits, dairy and other nutritious foods, their body can still miss out on various crucial nutrients. This is caused by worsening environmental conditions. Air and climate pollution affects soil in a negative way, which, in turn, produces mineral-deficient crop yield. Everal studies performed in Sweden show that between 1985 to 2002 mineral levels in locally-grown fruits and vegetables dropped severely. Mineral deficiency in everyday meals has been confirmed by WHO. As early as 2006, a trend was noticed that around 2 billion people in the world are experiencing mineral and vitamin deficiency. This, in turn, has negative consequences for fertility and potential success of fertility treatment procedures. For that reason various supplements are highly recommended.

Studies show that infertile men also suffer from zinc deficiency. Zinc is crucial for healthy sperm density, motile sperm amount and testosterone levels. Testosterone, in turn, is required for sperm production. Because of that, zinc deficiency can lead for lower fertility potential in men. Other important supplements should include glutathione, a key antioxidant to decrese sperm stress sensitivity and selenium, which is required for stable glutathione stress sensitivity. Testicles require high selenium concentration to function properly, and because of that, selenium deficiency leads to worse sperm quality. One must not neglect L-Arginine (for increased sperm amount and motility), folic acid and coenzyme Q10 (for high fertlity quotient, sperm amount and motility).

PROfertil® supplement contains all of these building elements and is the only male supplement in the market that was reviewed by multiple scientific studies. A control group study was performed to evaluate PROfertil.  132 men aged 18 to 43. All of these men have been infertile for over a year and have been diagnosed with at least two pathological spermogram test results. For three months, all 132 men were required to take two pills of supplement each day and were designated as therapy group. A separate group of 73 men was assembled and designated as a control group. After the testing period, the results were compared and PROfertil® was proven effective. (Improvement of sperm quality after micronutrient supplementation. Imhof M, et al; e-SPEN Journal 7(1).) 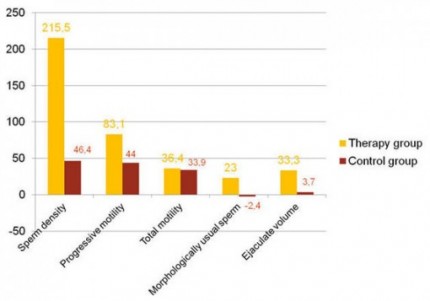 PROfertil® is recommended for men whose partner is undergoing assisted fertilization treatment. Both fetus and embryo can be heavily affected by DNA Fragmentation Index. Damaged DNA core in sperm can lead to worse quality embryo, and, in turn, lower the embryo’s chance of attaching itself onto the uterine wall. Because of that, in can increase the possiblity of miscarriage. Also, this information should be important to every couple trying to conceive, either with or without assisted fertilization. PROfertil® testing has evaluated the effect of hyaluronic acid connectivity on sperm quality to prove that higher hyaluronic connectivity leads to higher quality sperm and better sperm morphology. The testing has proven that this supplement has direct and positive influence on sperm quality, morphology, DNA core integrity and can lower DNA fragmentation. (LipovacM, et al.; EMJ Urology 2014 1:60-65). After 3 months of continuous usage, men in therapy group were showing better hyaluronic connectivity results that the control group, thus proving the supplement effective.

Do you have questions?